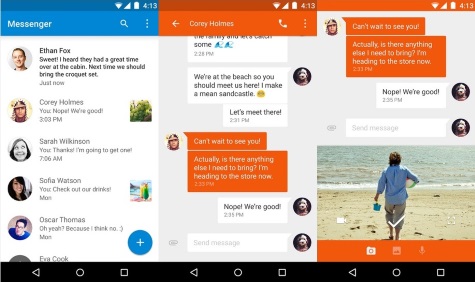 Download Google’s latest Messenger app for Android from our website, you can download it from Google’s Play Store or from the link given below, just click it and get your copy and install it in your Android Smartphone to check out the new messaging app from Google with new features. The app is supported by Smartphone’s and devices with OS running on 4.1 or later, so most of the users can use this app on their Smartphone.

Using Google app also gives us the confidence of providing us with frequent updates for every Android device, and we can’t pretend to hide the main face behind the Android OS who is also Google itself. Speaking of Messenger app, the app is used for sending ‘SMS and MMS’ only and it has other features packed into it, so it’s kind of modern hangout with Social app’s feature backing up, like it has image and video capturing straight within the app, so there’s no need of taking a picture first and then selecting for sending as you can directly take and send within the app’s interface. Interface has the material design as this app was located as a stock app in Lollipop OS, the app also has quick search box from where you can search for files, contacts and attachments. Considering other messaging app the Google Messenger app makes quite a deal for Android users but still has to be developed.