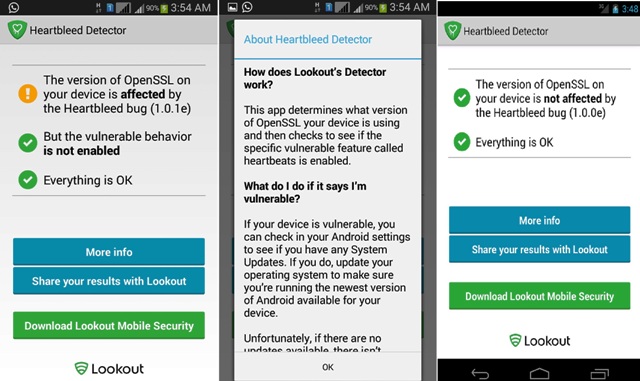 As we know now a days there is a bug named “Heartbleed” that has made the OpenSSL vulnerable by exploiting the heartbeat of OpenSSL. The bug is meant to compromise the OpenSSL servers and providing your confidential data like username and passwords to hackers by request to server for request data from the servers memory, even when your computer is not accessing the server or website. This Heartbleed Bug is mostly affected the Android devices which are running on Android 4.1 JellyBean operating system because over 35% of the overall Android devices are running on this version.

Now, this is obviously a risk because all your important and confidential data is going to the hacker who can do any thing with it. Remember, i said Mostly, and Not only Android 4.1 devices are effected. It can also be your devices which are running any OS between Gingerbread to Kitkat 4.4.2. So, what to do now? How will you come to know if your Android phone or tablet is really effected with Heartbleed or not? Dont worry, we have the solution.

There is an official App released by Lookout Mobile Security that analyze your phone and lets you know if your phone is affected or not. It is named as “Heartbleed Detector”. Sized in just 200KB the app is very useful and you must run it once on your phone to be at the safer side. This application will only check your OpenSSL version and determine if it is affected or not. It will not touch your apps or accounts or anything. Just checks the OpenSSL affection and provides you a report like shown in the image below. You must install this app and confirm your device safety.