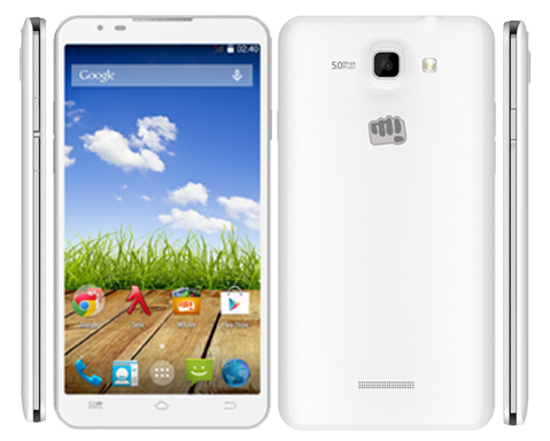 Micromax has revealed its new smartphone Canvas XL2 A109 in its Canvas series. Canvas XL2 A109 has been upgraded with its new powerful 1.2 GHz quad-core MediaTek MT6592M processor with Mali 400 GPU and an impressive battery life of 2500mAh, but it seems like the company doesn’t make any efforts in improving camera which is just 5MP with LED flash. OS has also been upgraded to Android 4.4 KitKat and in compare to Canvas XL A119 which was launched earlier this year Canvas XL2 A109 stands to be a good phone in performance.

The phone offers you a 1GB RAM with 4GB as internal storage which can be further upgraded upto 32GB via microSD card. it has a 5.5-inch capacitive touch screen IPS display with the resolution of 960 x 540 Pixels and supports dual SIM ( GSM + GSM ) with call standby on both the SIM with a 3G network connectivity. For video calling the phone is boast with 0.3MP front camera and it is soon going to hit the market.

PC suite is also available of Micromax Canvas XL2 A109 which helps you to backup your important data like Music, Videos, Book Marks, Notes, Images and much more in your computer by connecting your smartphone using USB data cable with your PC and the best part is that you can restore it whenever you want. It also helps you to check your software updates even you can update your softwares too. You can also make a complete backup of your contacts and e-mails onto the cloud service or can sync your contacts and e-mails to your MS outlook account using PC suite.

USB driver is very important software for your computer and smartphone. By connecting your smartphone through your PC via USB data cable you can use your phones internet by simply turning on the USB tethering options which is in your device settings. The software plays an important role to reboot your smartphone and it also helps you to installed custom ROM’s which makes your phone performance much better.