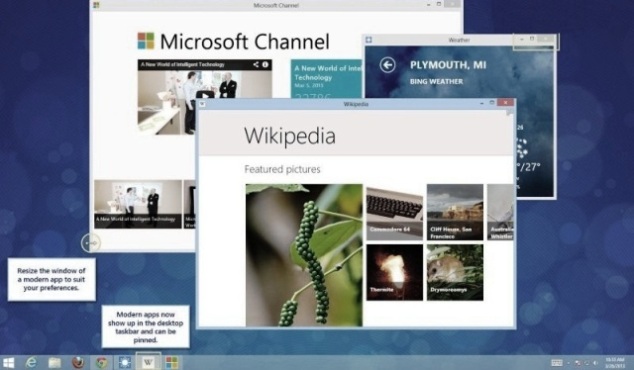 Microsoft released Windows 8 two years ago with all new Windows operating system. Completely different from all earlier windows we used. With Windows 8, Microsoft all introduced Metro screen and Metro Apps. These are the apps that appears as an icon your start screen which runs only in one click. Anyways, we all know about this 🙂 This article is about a software from Stardock called as ModernMix. Wondering what it does?

Well, many of us who are using Windows 8 or 8.1, dont like the Metro apps. There could be several reasons for the same. In such case, using ModernMix we can run those Metro Apps easily in Desktop View like Windows explorer or like we use run apps in earlier Windows operating systems. ModernMix supports several features such as you can run not just one but multiple Metro apps together in Desktop view, You can change the size of the apps, etc these are not possible while running Metro apps in their default way. Using this software you can also pin apps on your task bar for quick access. There are lots more to do. So, go ahead and get ModernMix from this page in one click if you are also among the ones who are fed up of Metro apps.