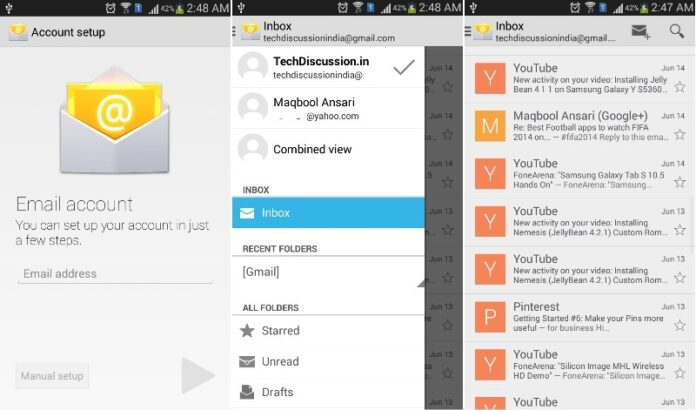 It seems like Google is making their Android stock apps public, one by one. If you remember, Google Camera App was put on Play Store which can be downloaded for several other smartphones, instead of just Google’s own Nexus devices. And now, Google has made their new version of Google Mail client available on Play Store which was earlier available on for few devices such as Nexus and Google Play edition smartphones. It is the same email client that supports  IMAP, POP3 and Exchange accounts on your Android smartphone but with whole lot of upgrades, features and performance. The current Mail app that comes with Android is very simple in UI and with limited feature, but the new app brings a lot more with a fresh user interface. To understand the difference, better, have a look at this comparison screenshots:

You can see there is a huge difference in both the app’s UI. The new Mail client is very similar to the Android Gmail app, and it is as fast as Gmail as well. Apart from the UI and speed, it also offers easy email configuration for Yahoo, Outlook , Exchange, Google, etc. It supports both IMAP and POP3 servers. Now, although the Mail client is available on Play Store, it is still not compatible with most of the devices. By saying Most of the devices, i mean, it also includes devices like  Google Play edition HTC One M7 and Galaxy S4. Forget about the rest of smartphones. It was also not compatible with my Galaxy Grand 2.But, if you get an APK, you can run it comfortably on any of your Android phone. So, if you are looking for the Google Mail 6.3, download the apk right away from here and enjoy.

Have a look at the new Google Mail