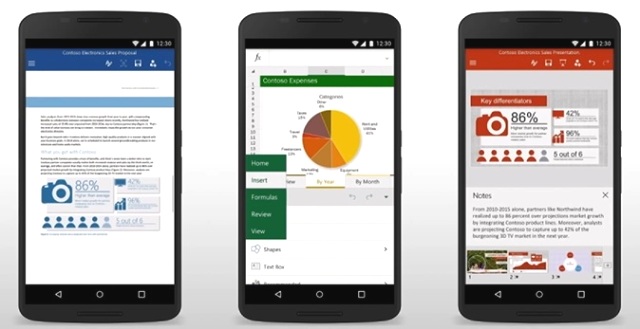 We had earlier provided the Microsoft Office Android Preview APK for Android smartphones. Now good news for Android lovers is that Microsoft has finally released MS Office for Android which is includes separate apps for Word, PowerPoint and Excel for users.

“Today I’m pleased to announce the general availability of the new Word, Excel and PowerPoint apps for Android phone. These join our previously released Office apps for Android tablets to complete the Office experience for the millions of Android users around the world”

The application can be downloaded on any Android phone running on Android 4.4 KitKat OS and more with 1GB of RAM. Now login with you Microsoft account or create a new one and edit and create all Word, PowerPoint and Excel files. Perform all office work on the go on your Smartphone with Microsoft Office, edit create and share your files from anywhere and backup them on OneDrive directly from the app. Moreover you can also sync the files to Google Drive or any other cloud service as well.

Now if you want to use other Microsoft Office service like Microsoft Access Microsoft Groove, Microsoft InfoPath, OneNote, Microsoft Outlook, Microsoft Publisher and more, you will need to subscribe for Office 365.

Microsoft has released this app on Play Store for Android users, also they have released the app on other App Stores which focus on specific mobile companies like Samsung Galaxy Store, Mi Store, Tencent and other stores worldwide.

Microsoft has aligned with Samsung, Sony, LG and many other Smartphone companies and now their Flagship and other Smartphones will feature pre-installed Microsoft Office applications of Word, PowerPoint and Excel.

Download the application now and perform all office work on the move easily on your Smartphone.