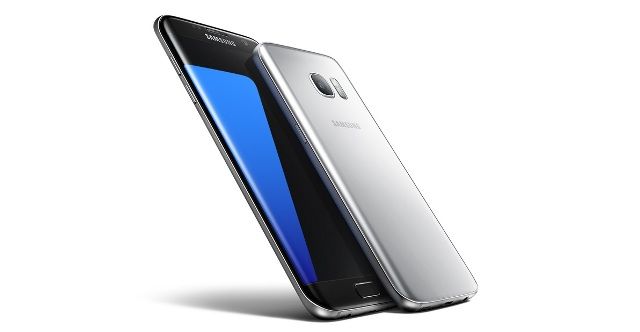 Samsung has finally launched its most awaited 2016 flagship, Galaxy S7 and Galaxy S7 Edge. The phones will be available from next month but the prices are yet unknown. Samsung Galaxy S7 is not just beast in performance but really smart in the software too. Talking about the specifications, the IP68 rated Water and Dust resistance Galaxy S7 sports a 5.1 inch Quad HD Super AMOLED always-on pressure sensitive display that keeps you updated with every new information and notifications without even turning on the display. Being a Quad display, it offers 2560 x 1440 pixels resolution with 577 PPI pixel density. You gonna love watching movies, pictures or playing games on such amazing screen.

The new Galaxy S7 comes with Hybrid Dual SIM support and is running on latest Android 6.0 Marshmallow OS with Samsung’s own Custom UI adding several new features to the software. It also has Fingerprint sensor placed in the physical home button. Samsung has powered the flagship with Quad-Core Snapdragon 820 processor / Octa-Core Exynos 8 Octa 8890 (2.3GHz Quad + 1.6GHz Quad) processor. It is further accompanied by 4GB LPDDR4 RAM and Adreno 530 GPU making the phone powerful enough to carry out any heavy tasks comfortably. As per storage, it comes in two variants, that is 32GB and 64GB internal storage. Both the phones support expandable MicroSD support up to 200GB.

Taking the photography yet another step ahead, Samsung Galaxy S7 is the first smartphone to come with Dual Pixel Sensor allowing you to capture crisp, clear photos in the dark environment too. It carries a 12 Megapixel primary shooter with LED Flash, f/1.7 aperture and Smart OIS. While on the front facing we get a 5 Megapixel Selfie shooter with f/1.7 aperture. The phone also has the standard Heart rate sensor and Barometer. This is a IP68 rated Water and Dust resistance smartphone which you can use upto 1.5 meters water for 30 minutes.

As per connectivity, Galaxy S7 supports almost all major connectivity features including 4G LTE, Wi-Fi 802.11ac, Bluetooth 4.2 LE, GPS with GLONASS, USB 2.0 and NFC. Samsung has backed up the phone with 3000mAh battery with Fast Charging support on both wired and wireless (WPC and PMA).

You can download the latest Samsung USB Driver and its PC Suite software for your new Samsung Galaxy S7 from here in just one click. PC Suite is very essential tool because of its handy features allowing you to keep your smartphone updated with most recent firmware updates and security patches. It is the best way to manage your phone directly from computer. It lets you backup the entire phone on your computer including the installed apps, SD data, files, folders, even the phone settings. If anything goes wrong with the device, you cam simply Restore the phone back to its state using PC Suite and you not gonna loose a single file.

Using Samsung PC Suite you can also Sync all your multimedia stuffs including Pictures, Music and Videos with your computer, even Wirelessly. Most importantly, it lets you synchronize essential information from the phone such as contacts, notes, bookmarks, appointments, calendar entries, messages, emails, etc with PC or programs like Office Outlook or even with major cloud services including Google, Yahoo, Microsoft and more so that you can access these data from anywhere and anytime. There are many more other important features of PC suite that not only increases the productivity of your Galaxy S7 but also provides next level security.

USB driver on other hand is essential too. Unless you have proper USB Drivers install on your computer, it will not detect you Samsung Galaxy S7, not at all. It is also must for carrying out development tasks like Rooting, Installing custom ROMs, installing custom Recovery and much more. So, go ahead and download both the tools right away to your desktop and get the best out of your Galaxy S7.