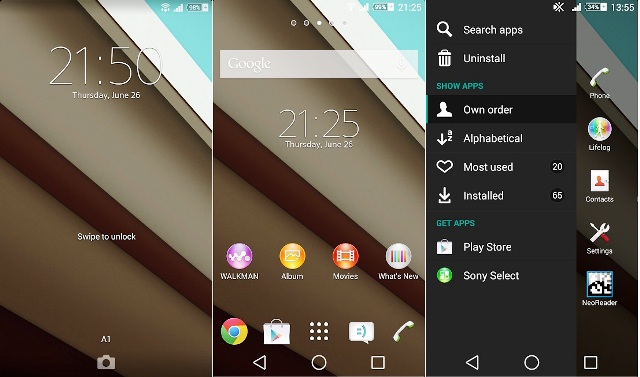 Google revealed the next upcoming Android version known as “Android L” (so far), probably the ‘L’ may stand for Lollipop. They also launched its Developer preview which can be only installed (for testing purpose) on Nexus 5 and Nexus as these both are Google’s own devices. What about other smartphones and tablets? Can’t we experience Android L unless it is released officially after couple of months?

Answer is no. If you are having any of the latest Sony Xperia smartphone, then you can atleast experience the all new UI of Android L right away. An xda member who created a APK file theming the new Android version for Xperia devices. A big thanks to him for creating this as an APK and making it available for non rooted smartphones. Yes, that is correct. You dont need to root, neither need to flash it from recovery. It is just a simple APK file which can be installed on your Xperia just like other APK files.

Once installed, you will get the all new Android L icons, notification bar, and UI. To make it much richer and original, you can download and install the Android L Keyboard as well. This is also an APK file and dont requires rooting but packed with several features.  So Xperia users, Enjoy !!